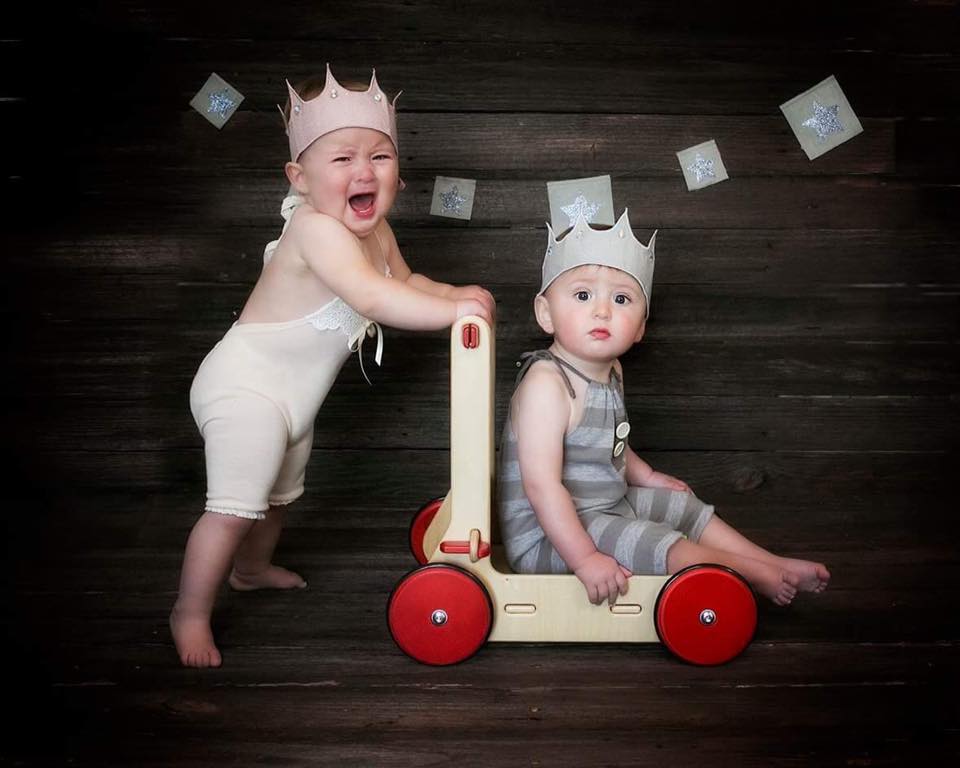 Last night, Riley wouldn’t go to sleep. By 9pm, she had graduated from pretend crying (because it was wearing thin and she could see how cranky Mummy was becoming with every jaunt upstairs to attend to her) to calling out with pretend reasons for still being awake.

“My foot hurt. Want some cream on it.”
I gave her some cream.

“My nose! My nose!”, followed by a long pathetic-sounding pretend snuffle.
I gave her my Vicks inhaler.

“Lion’s coming! Lion’s coming!”
“Oh for goodness sake, Riley. There is no lion coming. There are no lions wandering about. They live in Af-ri-ca. This is Au-stra-lia!”
“Want sleep in Mummy’s bed.”
“Fine.”

After a dozen or so treks up and down the bloody stairs within a half-hour span, she had broken me. I went downstairs, chugged the remains of my glass of wine, made the all-too-familiar trip back upstairs, collecting the complaining girl-child on the way, cleaned my teeth and climbed into bed, laying Riley down beside me.

I swear to God, my kids are trying to kill me.

After an hour or so, I was rudely awoken by the boy-child, screaming at the top of his lungs. Actual proper screaming. Like he was being attacked by a vacationing African lion. My husband (who had been downstairs watching TV) and I reached the hallway at the same time, but since Mike’s eyelids weren’t welded together like mine, I let him attend to Flynn and I stumbled back to bed. The screaming continued. In fact, I’m fairly sure it increased in volume and pitch. I lay there, wondering what the hell was going on, trying to comfort Riley, who was also now awake and insisting on going to see what was wrong with her brother. I let her. I figured that Mike would appreciate the back-up. I continued lying in bed. Don’t judge me. It was cold. I was tired. Surely the father of my children was more than capable of calming down his distraught offspring? Then Mike rushed in, stating “He’s freaking me out! I’m not sure if he’s awake or not!”

No, but every other f*cker is!

“Just pick him up and bring him in here” I replied from underneath the doona.
“He wont let me” Mike said. “He’s doing that thing he used to do when he was a baby and had reflux. He’s making his body stiff as a board!”

And so that’s how we all ended up in Flynn’s room at 11pm. Even Bundy.

Sleeping with an adorable twin snuggled cozily at either side of me sounds like it might bring back fond memories of my pregnancy when they were snuggled cozily in my womb, right? Wrong. It was like being in the ring with Tyson. I was kicked, I was hit, I was headbutted. Mike probably thinks he drew the short straw by having to sleep in the guest bed because there wasn’t enough room in our bed, but I would’ve happily swapped places with him in a heartbeat.

Morning rolled around all too soon, and I was awoken by Flynn patting my head and asking me “Where’s Dad?”. Riley was next to wake with a loud complaint about not having enough of the blanket. Flynn then demanded that I find his projection torch. I told him I was trying to sleep and he could go and find it himself. Lots of banging and running sounds later, he came back into the bedroom exclaiming indignantly “It’s up high, Mum! Can’t reach it!”

I suddenly realised exactly where it was. Where I’d left it last night when I’d tidied the play room – on the bannister, just out of reach of little hands. I quickly weighed up how dangerous it would be to let him climb up and get it versus how cold it would be getting out of bed to get it for him. Decision made, I said “Get your stool. Then you can reach it yourself.” Don’t judge me. I’d had very little sleep and was covered in fast-forming bruises. I was, however, quickly rewarded by Karma herself (she’s a bitch sometimes!) when he returned excitedly, torch in hand, and shone it directly into my eyes. My retinas will never be the same.

We are all so bloody tired that today is simply about survival. I still haven’t washed the breakfast dishes and it’s afternoon now. The house looks like it’s been ransacked because I am basically letting the twins do whatever they want. Except have lollies for breakfast. They must have sensed my complete lack of parenting ability today because Riley did ask that very thing. And I won’t lie, I actually considered it for a minute or so, but then I reasoned that I didn’t have enough energy to put up with the chaos caused by the ensuing sugar rush, and so I summoned my inner adult and declined her request.

I wonder how Mike is surviving at work?

Bundy is asleep in her bed. She has the right idea. Would it be wrong of me to give the twins the container full of Lolly Treats and crawl in beside the pooch for a nap?

I said it before and I’ll say it again – my kids are trying to kill me!

This is pure exhaustion. I bet she secretly wants to be put back on a plane and returned to my in-laws’ house where there were no such things as toddler twins roaming free.